In the 1970s, Robert Mapplethorpe and musician, poet, and artist Patti Smith lived together in New York’s infamous Chelsea Hotel where he started shooting Polaroids to use in his collages. Drawn to photography, Mapplethorpe got a Hasselblad medium-format camera and began taking pictures of his friends and acquaintances—artists, musicians, socialites, pornographic film stars, and members of the gay S & M underground. Despite his shocking content, Mapplethorpe was a formalist, interested in composition, color, texture, balance, and, most of all, beauty. In the 1980s, he concentrated on studio photography, specifically nudes, flowers, and formal portraits that are considerably more refined than his earlier work. After Mapplethorpe died from an AIDS-related illness, his work precipitated national controversy when it was included in “The Perfect Moment,” a traveling exhibition funded by the National Endowment for the Arts. 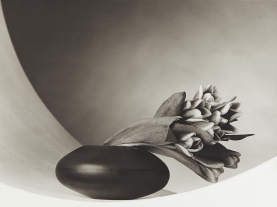