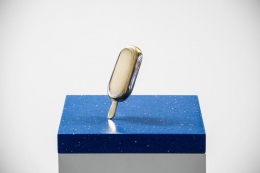 With a wry and darkly humorous title lent from Whale’s 1998 indie album, All Disco Dance Must End In Broken Bones, presents as a group exhibition about gaining traction and accelerating to live your “best life”. Be it that this need for speed is to go ”all in” to pursue your intrinsic urges and desires hedonistically, or question being rather of truthful self-realization to be who you are and want to be, at the end of the day. Possessing often an immediate depictive quality, the works are layered, connoting directly to one thing at face value, while each being informed by a specific narrative of their own that go beyond what is seen at glance.

Gethin Wyn Jones’s work You’re a Mystery to Me, sees an erected Magnum casted in solid bronze, which may stress excess and brings thought to a consumer brand which has almost entirely built its identity around allusions to adult pleasures and sensual sensaitons. “Release the beast” and “Mini size, maximum pleasure” read two of many ad slogans.

Seroconversion is an art duo (Birt Berglund & Johan Sundell) originating from “queer noise” exploring how “queer” defined as unwanted desire sounds (un)musically. Homotopos II departs from how queers in history have had to renegotiate the boundaries of public space and appropriate parts of the public domain in order to create ”rooms” to interact and engage intimately in private. Public restrooms as such, in their capacity already as intimate sphere have historically been grounds for the act of “cruising”; a notion that emphasizes the universal need found in each to intimately connect with others. Five abstract sculptural forms together relate to the disposition and architecture of five actual restooms that have seen such use in Gothenburg. Philip Dufva’s Meet Me in The Park, It’s Ok Just Spit! is made up of two towering sculptural light posts exuding pink light that in the exhibition adopt the role of two abstract bodies allegorizing human bodies “cruising”. The work was inspired by an actual historical map of sites and public parks in Örebro for “cruising”. The pink light signifies the sort of codes that by necessity have needed to be used in the pursuit of “looking” and identifying other “members” and potential “mates”.

Body and Soul, a sculpture by Karon Nilzén Jonsson intersects the abstract and figurative with human-like traits in form and figure. It is a sculpture that appears in transition and visibly plays on the idea of breaking out of a mold, of moving and not being held back. Theodor Ander’s itch is a double entendre of sorts. The compressed abstract shape entails both “the act” and “the end” in relation to the exhibition theme; alluding corporeally to kink and the fetishization of objects on the one hand and on the other to safety and crash.

Carla Garlaschi’s deceptively ingenious practice employs popular cultural notions like the telenovela entertainment format and latin pop (as her alter ego Princess Prada) to get to grips with realities that relate to the unruly machinations of regional art spheres and else. Elevate Your Pitch serves as a transmedia storytelling video work in which the artist is found alone in an ultra-secure Stockholm data center bunker as a lonesome noctambulant rider. This highly guarded character is also seen in a limousine studio office, where she appears to be detached and in no contact with her surroundings. The soundtrack, with charged existential lyrics in Spanish, tells of the alienation and the anticipation for pivotal moments to arrive in a big city. Co-directed with Camilo Bustos Delpin.

As a ”prelude” the exhibition begins already outside the “red cube” with two shiny surfaces that represent a play of duality with the everyday idiom; “What comes up, must come down”. If Gethin Wyn Jones’s There’s Something They’re Not Telling Us is the initial alluring high, Seroconversion’s Homotopos III is the aftermath and the due release from your organic systems. A sound sculpture, equipped with a noise generator, Homotopos III, consists of a found urinal which reconnects thematically with Seroconverion’s acrylic glass sculptures inside the “red cube”. 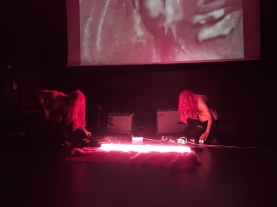