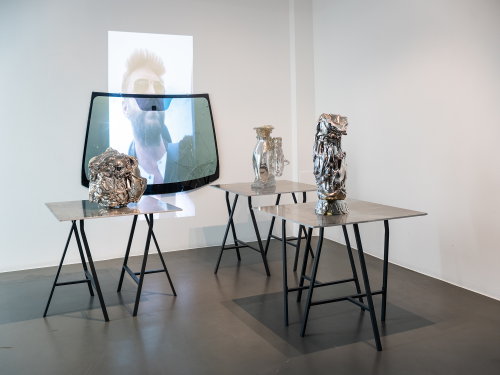 Fredrik Nielsen
When I Look at The Television I Wanna See Me Staring Right Back at Me, 2020
Mixed Media Installation

Art that involves the use of video and /or audio data and relies on moving pictures.

The introduction of video in the 1960s radically altered the progress of art. The most important aspect of video was that it was cheap and easy to make, enabling artists to record and document their performances easily. This put less pressure on where their art was situated giving them freedom outside the gallery.

One of the early pioneers of video was Bruce Nauman who used video to reveal the hidden creative processes of the artist by filming himself in his studio. As video technology became more sophisticated, the art evolved from real-time, grainy, black and white recordings to the present day emphasis on large-scale installations in colour such as Bill Viola’s multi-screened works. Other artists, e.g. Gillian Wearing, use a documentary style to make art about the hidden aspects of society.

In our group exhibition, In Search of A Future to Come, Fredrik Nielsen uses video art.