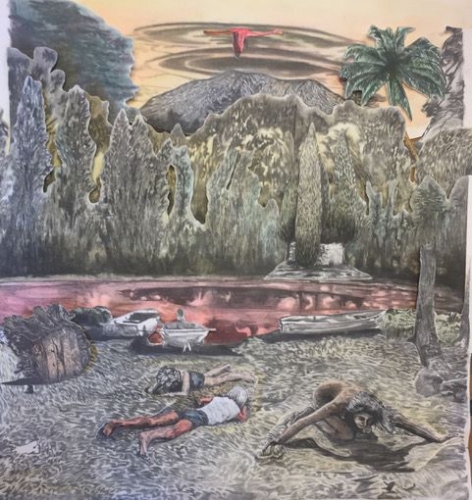 The French term Gouche is used to describe an opaque water-based paint that has been around for a very long time.

Even though the term gouache only dates back to the eighteenth century, artworks made with this type of paint has been created since the ninth century. The paint got popular in Europe during the fourteenth and is still used today. Gouache is a type of paint that is similar to watercolour, the difference being that it is a lot thicker and therefore creates an opaque surface. The thick texture is the result of a higher concentration of binder and the use of inert pigments such as chalk.

The result of the gouach paint is a heavy, velvety texture that absorbs light rather than reflecting it, creating a very smooth appearance. It is often used in combinations whit other types of paint, such as watercolour. In the artwork Paradise Engineers displayed here the artist Love Lundell has for example used gouache in combination with ink and acrylics bleach.