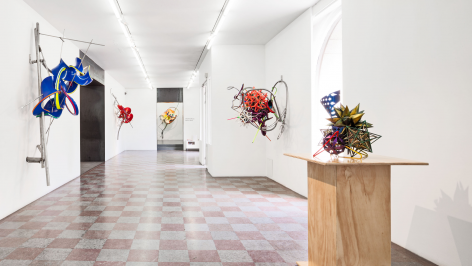 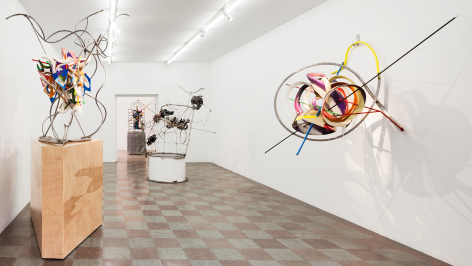 Frank Stella is known for constantly experimenting with both new technical possibilities and esthetic expressions. In his new works he combines 3D-printed resin bodies with bended steel tubing that gives a rough industrial impression which stands in contrast to the undulating, complex and multi-colored spirals. We encounter graceful movement, a playful lightness and endless variations of form and color in these works, and a pulsating rhythm that is characterizing for all sculptures.

There is no other artist who lives up to Kurt Schwitter’s statement Kunst ist Form as consequently as Frank Stella with his work. Throughout his whole body of work – from the Black Paintings in the end of the 50-ies that marked his first major success to the latest sculptures now presented in Stockholm – the focus on form has been both starting point and goal while representation and symbolism have been rejected. Frank Stella’s forms possess to the highest degree a reality and presence, and they often relate to art history and other artistic genres as literature and music.

The Scarlatti Sonata Kirkpatrick series refers to the Italian composer Domenico Scarlatti (1685-1757) and the American musicologist Ralph Kirkpatrick (1911-1984) who compiled Scarlatti’s sonatas. “If you were to be able to follow an edge and follow it through quickly, you’d get that sense of rhythm and movement that you get in music”, says Frank Stella himself about this series.

Frank Stella is considered a pioneer of abstraction and an artist who has always followed his own path. He started showing his work in the end of the 50-ies, at a time when contemporary art was dominated by expressionism and action painting. Since then, his work has never stopped changing and surprising: The flat canvases developed into reliefs that later became three dimensional objects. The paint brush was replaced by tools and in recent years he has started refining his handmade models with the help of computer programs. His oeuvre started off with simple geometrical lines and has developed into complicated and complex structures; it has transformed from minimalism to maximalism and taken it further from there. 77 year old, Frank Stella keeps spending a lot of time in his studio and has great plans for his upcoming exhibitions.

Frank Stella was born in Malden, Massachusetts, in 1936, and lives and works in New York. His body of work reaches over more than 50 years and includes painting, sculpture, prints, and also architecture. He had two solo exhibitions at the MoMA (1970 and 1987) and was awarded the National Medal of Arts from President Barack Obama in 2009. Frank Stella is represented in the most important museum and private collections around the world, and has had more than 200 solo exhibitions to this day. The latest major retrospective was held at the Kunstmuseum Wolfsburg in Germany in 2012. Frank Stella: Recent Work is the artist’s eighth solo exhibition at Wetterling Gallery. 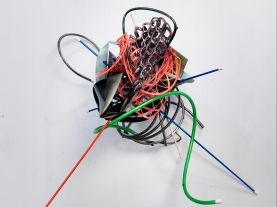